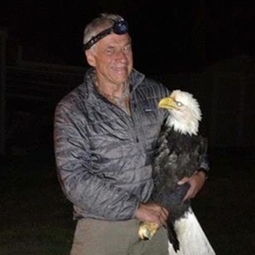 Each year Dr. Parent and his staff care for many sick, injured, and abandoned wildlife.  Dr. Parent has been donating his time and services to wildlife for over 20 years.  He is an avid amateur naturalist who has treated nearly all wildlife species on Whidbey Island.  He has participated in numerous research projects including Mountain Goats in Olympic National Park, Bighorn Sheep in Northeastern Washington, amall seabirds (Marbled and Kittlitz's  Murrelet) in Glacier Bay National Park.  He has made four tirps to observe wildlife in the Alaskan artic.  Dr. Parent has also treated wildlife in the field in Belize, Hawaii, and the Malheur Wildlife Refuge in southeastern Oregon.  He is a member of Whidbey Audubon Society as well as a field trip leader for them.  He has been a team captain for the Christmas bird count for many yers.  His most recent adventure was to travel to Madagascar to study Fat-tailed Lemours in the summer of 2013.